Saw a few straggler patients then packed up and moved an impossible amount of stuff down to the river and hung out there on someones porch waiting for the boat. Had a swim in the cool river, ate tuna wraps and watermelon. 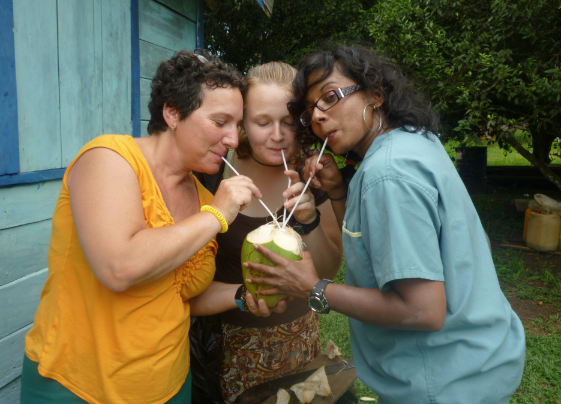 On the jet boat hydroplaning toward the town of Issanu, 50 miles per hour thru rapids and rocks. All trust placed in the competence of the boat captain knowing each twist and turn of the river. No life preservers on board this boat. I pray for the best. Its cramped and hot and at a stop Burnsley brought us cold Cokes. Relief in a bottle! We didn’t get cold drinks often. What a treat when we did. At one stop Bekkie registered us at the police station. I looked for a bathroom and found one in the health post which I recognized because there were beds, and health records but no mattresses, no meds and no patients. A woman who was the health worker assumed I was staying because I was dressed in scrubs. I told her I would love to but I was moving on and got back on the boat.

When we disembarked, I could sense we were in a wild place. It seemed like a town in the jungle similar to a scene in Apocalypse Now.
Loud Carribean music blaring, drunk people on the dock. Stoned people, garbage burning and smelling toxic. Dogs everywhere.
Immediately David, the health worker informed me that we had a snakebite patient in the infirmary. We had two emergencies that night, a pregnant sickle cell patient with a low hemoglobin and a case of a mysterious injury where a young man got stomped on by other people. Ultimately, the Amerindians believe in Black Magic and this may have been one such case as there was no physical evidence of this having happened except for his cries of pain and mutterings about the village being no good.

Working in impossible conditions in the clinic in complete darkness except for out headlamps, trying to find supplies in a huge duffle bag.
Always trying to find everything this trip… I never know where anything is… Living out of a backpack its hard to keep organized.
My ankles are swollen (?) and my shoulders are stiff in the morning from sleeping on a hard surface. I have a strange round rash on my abdomen but holding up well and feeling fine. 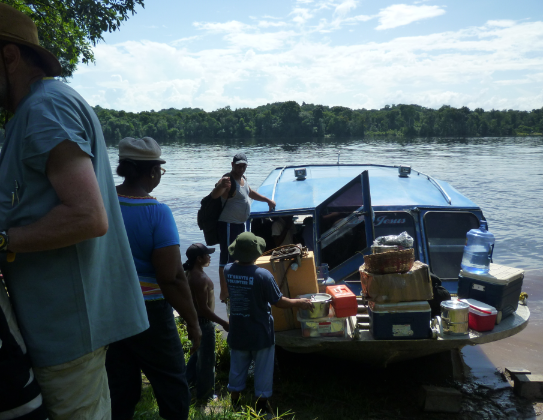 We leave tomorrow for Bartica, an actual town. I am looking forward to that.
There are starting to be some personality dynamics apparent in the relationships in the group but nothing that impaired our functioning or the care we are delivering.
I love all the people in our group and am not willfully part of the power dynamic.
Staying neutral.
Had my first beer yesterday just cause it was cold. It didn’t make me cooler but it was fun to be part of the Banks Beer (4.5 % alcohol) culture in the town for a bit. We went to the store and were taking pics of the native Amerindians and they were taking pics of us!
After all, we are the weird looking ones.